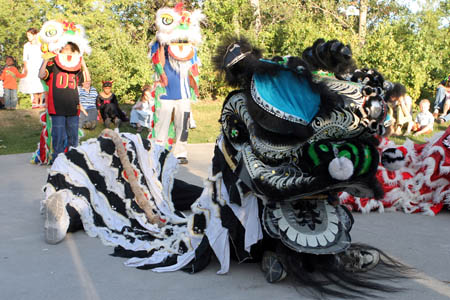 The Success Dragon Lion Dance Troupe has been performing in the Ottawa-Gatineau region for over 30 years; our objectives are to promote the traditional Chinese culture and to get involved with events in various communities.

Our troupe is also involved in the expression of the martial arts way. Chinese martial arts (Kung Fu) may be subdivided into five groups of awareness.

History of the Lion Dance

The Chinese Lion Dance is a 3000-year-old Chinese tradition that symbolizes prosperity, luck and happiness. According to legends, the dance tells about a creature that terrorized villagers with thunder, lightning and rain. However, the aftermath was an excellent harvest for the villages. Subsequently, the dance is performed in every festivity with the thundering sounds of drums, cymbals and gongs.

With the lion dance, the two most obvious manifestations of Kung Fu forms are patterns and sets. A pattern refers to a particular way in which a practitioner holds the hands, legs and body in position in motion. Sometimes it may refer to a short series of actions. A set is formed when numerous patterns are linked together for the convenience of training. Sets consist of different patterns ranging from 36 to 108 patterns.